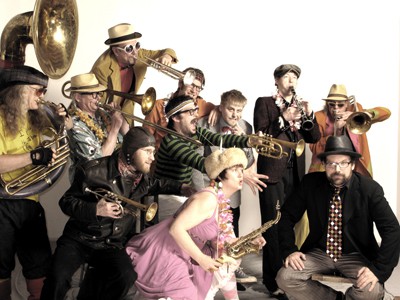 The Brass Messengers of Minneapolis, MN, formed from the annual rubble of of the Heart of the Beast Mayday Parade and Ceremony in Minneapolis. Each year, the parade came and went, puppets packed, park cleaned, summer began and the founding members of the BMers left feeling like our work was unfinished, again. Having compiled years of mobile brass scores for ourselves, we took to making it an ongoing affair. Now we dine together (playing music), we take the train (playing music), bike (carrying our instruments, singing), camp (playing music), and bring the party wherever we end up. We started as a street band playing the music of the Carribean (Ska) and Balkans (Fanfare Ciocarlia), but now play anywhere from the small stages of local bars, where we have throw a country song to the crying drinkers, to Northeast Minneapolis, where a high speed polka or two is essential, to parties for kids, where we get to run in circles with many small children (that is the brass band dance for the under 6 crowd), to gatherings of our activist kin, where a fiery Bella Ciao prepares us for the mean world out there, to the big stage, where we try to play in tune. Our music of choice is anything that fits in the twisted brass tubing, from originals to “covers” from around the globe, as long as it makes a joyful noise.