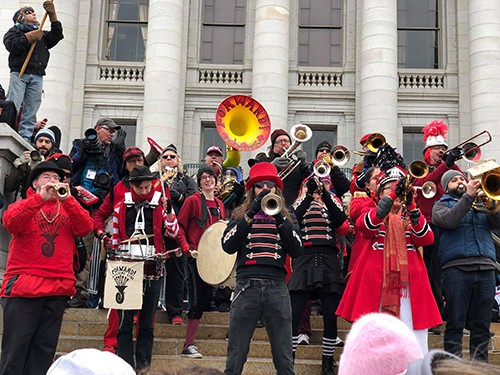 Directly inspired by the HONK! Festival’s CD, “Live At The Dilboy,” Forward! Marching Band formed in Madison, WI during January 2011, adopting the progressive motto of Wisconsin as the band’s name in response to the inauguration of the state’s new regressive governor. When the governor launched his surprise assault on collective bargaining in February, Forward! immediately swung into action, bringing music and energy to the soon-to-be immense street protests amid the frigid Wisconsin winter. For the next two months, the band marched and played nearly daily to sustain the Wisconsin Uprising until the resistance effort shifted from street protesting to election recall petitioning.