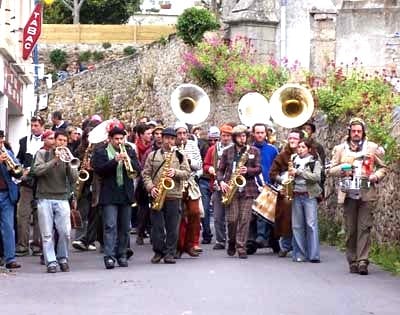 Titubanda is a 35 piece brass band from Rome, Italy, playing everything from traditional Italian folk songs to avant-guard jazz via Latin American rhythms and Arabic melodies. A musical journey from Cuba to Bombay, through the Balkans and Cairo, reinterpreting classics and inspiring original compositions. Omnivorous, and with a robust appetite, the band loves not only traditional homely recipes but also exotic cuisine, spicy dishes – sometimes with the odd acid flavour.

Titubanda – the “Wavering Band” – was born on may 1st 1998 as an open collective, a musical workshop where everyone can play and share the pleasure of making music. Rejecting merit and profit criteria and without any internal hierarchy, the group is not only a focus for the flourishing of cultural and social diversity and action, but is also the bearer of these values into the wider community, taking part in political demonstrations and social initiatives. The band’s presence in city streets has a poetic impact in contrast with the dehumanizing rhythms and rampant individualism of Western society. Its music creates immediate involvement, awakening deeply repressed emotions and unleashing the desire to celebrate together in public spaces.

To its social commitment, Titubanda adds a passion for revelry that has taken the band to major festivals of street bands throughout Italy and Europe: Munich, Germany; Paris and Montpellier, France; Guca, Serbia; Bilbao, Spain, and many others. In tune with this ethos, the band itself promotes and organizes the “Sbandata Romana”, an international street band festival that occurred for the third time in 2005. Celebrating ten years of activity, Titubanda will cross the Atlantic for the first time in October, 2008, to tour the East Coast of the United States, playing in Providence, at the Honk! Festival of activist street bands in Boston, and in New York City.

Titubanda’s ultimate and legendary – though not unreachable – aim is to succeed in playing a well-tuned A minor chord!!