Throughout the country and across the globe, a new type of street band movement is emerging — outrageous and inclusive, brass and brash, percussive and persuasive — reclaiming public space with a sound that is in your face and out of this world. Called everything from “avant-oompah!” to a “brassroots revolution,” these bands draw inspiration from sources as diverse as Klezmer, Balkan and Romani music, Brazilian Samba, Afrobeat and Highlife, Punk, Funk, and Hip Hop, as well as the New Orleans second line tradition, and deliver it with all the passion and spirit of Mardi Gras and Carnival.

Acoustic and mobile, these bands play at street level, usually for free, with no stages to elevate them above the crowd and no sound systems or speaker columns to separate performers from participants. These bands don’t just play for the people; they play among the people and invite them to join the fun. They are active, activist, and deeply engaged in their communities, at times alongside unions and grassroots groups in outright political protest, or in some form of community-building activity, routinely performing and conducting workshops for educational and social service organizations of all kinds.

At full power, these bands create an irresistible spectacle of creative movement and sonic self-expression directed at making the world a better place. This is the movement we call HONK!

What is the HONK! Festival?

An awesome annual 3-day free festival bringing brass bands from all over the United States and the world to Somerville for a celebration of music, community and activism. Organized entirely by volunteers and now in its 17th year, the festival kicks off on Friday night with a lantern parade in Davis Square neighborhoods and a band showcase. On Saturday more than 25 bands take over Davis Square for a giant music and dance party. On Sunday, local community groups, artists, and activists working for a variety of progressive causes — economic justice, protecting the environment, world peace, an end to racism — join the brass bands to make a spectacular parade from Davis Square to Harvard Square along Mass Avenue. Other HONK! Fest activities include a Day of Action, when bands convene to play on behalf of a cause, and roundtable discussions for participating musicians and organizers of other HONK! festivals around the country to gather and share experiences.  HONK! in Somerville has inspired festivals near – Providence, Brooklyn, Seattle, Austin, Detroit, and far – Australia and Brazil.

Boston Magazine recognized HONK! with a “2015 Best of Boston” award, writing “The music pounds in your chest. The activism moves your soul.” Please join us for our celebration, and consider supporting the festival by volunteering, housing visiting musicians, or making a donation! 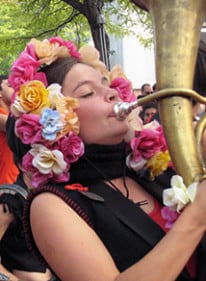 Since its founding, more than 50 bands have attended the HONK! Festival. You can see a full listing here! The all-volunteer organizing committee has been changing and growing since the festival began, benefiting from the talents and enthusiasm of many friends and colleagues. Right now, we have a core coordinating group made up of John Bell, David N. Blank-Edelman, Trudi Cohen, Ken Field, Jean Foster, Reebee Garofalo, Cecily Miller, Cherai Mills, Eric Sutman and Matt Taylor. Additionally, we have a number of organizers who help on various more specific aspects of the festival. These include Matt Bailin, Jesse Edsell-Vetter, Dylan Foley, Harris Gruman, Sara Honeywell, Charlo Maurer, Deidra Montgomery and Sarah Otts.

We have these principles of unity.

But the HONK! Festival isn’t just the organizers and the musicians. It’s a grassroots, non-profit event made possible by the financial and in-kind support of a thousand local residents and businesses. For the duration of the Festival, more than 500 musicians will be housed by generous neighbors and friends and many local restaurants will generously provide food for the performers and volunteers. Scores of community members have donated hours of labor to make HONK! possible. Most significantly, none of the bands will be earning any money for the festival, and most will have only some of their travel expenses covered. The bands are inspired to travel great distances, at great personal expense, to joyously celebrate our hard work to reclaim public space—the world over—for all people. The bands long to connect in honor of our struggles for justice. We hope you will come, to connect and celebrate with us, and further the cause of freedom, justice and collective emancipation. 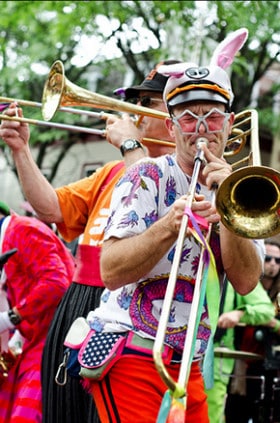 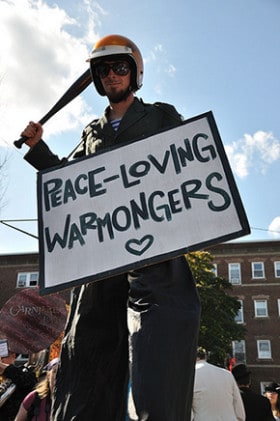 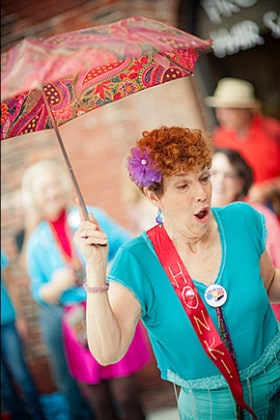 What is an Activist Band?

By describing HONK! bands as activist, we are referring to bands which are socially engaged — some in direct action and outright political protest, others in community building, be it performing for social justice or community-based organizations or conducting workshops in the public schools. Further, by performing at street level, usually for free, without sound amplification and with very little distance between artist and audience, HONK! bands create a participatory spectacle to reclaim public space in ways that place them at the heart of activist politics.