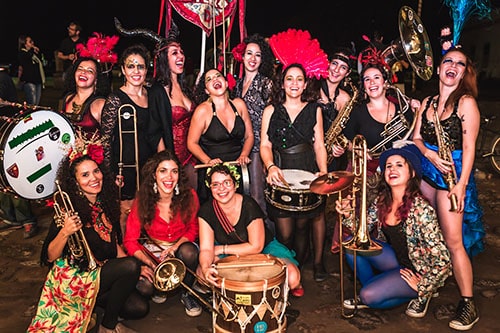 “Damas de Ferro” was formed in 2013 out of the desire to create a project that showcased street art and music made by women playing brass and percussion instruments. The band, exclusively made up of women, has 14 musicians who play a repertoire of contemporary music in a variety of performance styles, from stage shows to the streets.

The group believes strongly in the empowerment of women. All of the musicians in the band share a common goal of highlighting and supporting all forms of feminist protest throughout the city. We try to infuse our musical identity with a strong, lively repertoire, as suggested by the name Damas de Ferro (Iron Ladies).

The intent is to combine the diverse musical tastes of the members of the band, which include Popular Brazilian Music (MPB), jazz, forró, afro-samba, and rock n’roll.