Forward! and The Milwaukee Molotov Marchers

Forward! and The Milwaukee Molotov Marchers 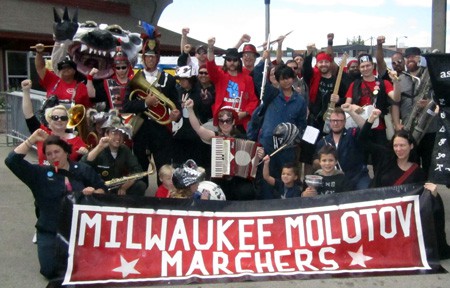 Forward! Marching Band formed in Madison during January 2011, adopting the progressive motto of Wisconsin as the band’s name in response to the inauguration of the state’s new regressive governor. When the governor launched his surprise assault on collective bargaining in February, Forward! immediately swung into action, bringing music and energy to the soon-to-be immense street protests amid the frigid Wisconsin winter. For the next two months, the band marched and played nearly daily to sustain the movement until the reistance effort shifted from street protesting to election recall petitioning.

The Milwaukee Molotov Marchers was conceived on an unusually warm spring night over beers at the Riverwest Public House. Following the revolutionary events at the Capitol in Madison, Wisconsin, we decided Milwaukee needed a radical marching band to make some f-ing noise at the amazing events taking place all over the state. Several members are union members whose collective bargaining rights were stripped by Scott Walker’s questionably legal Budget Repair Bill. We believe in creating music as a form of direct action that has the potential to bridge divides in the nation’s most geographically segregated urban city. We seek to commit “random acts of band” all over the city in order to break up the monotony of capitalism, have fun, and form relationships with other groups and cooperative businesses in Milwaukee. We conceive of ourselves as a creative outlet for folks of all abilities and walks of life to get together and make some noise.

The combined groups appearing at HONK!

The Forward! Marching band and Milwaukee Molotov Marchers are Wisconsin’s radical marching bands. The groups both formed as a creative response to Governor Scott Walker and the Republican legislature’s immoral and questionably legal attack on workers’ rights in the state of Wisconsin. We’ve combined our super powers into one badass badger band for Honk!–channeling the passion and power of the people of Wisconsin into one agitated/agitating noise machine.