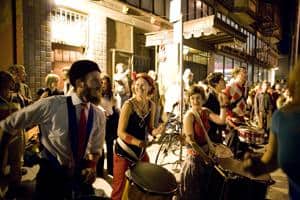 Born in Chico, raised up at Burning Man, and brought to urban fruition in Oakland, California, the Loyd Family Players take the pulse of traditional Brazilian samba and twist it into a loud, sweaty, sexy muss that’s all their very own. The ten-to-twenty-person coed percussion troupe swipes elements from hip-hop, dancehall, punk rock, drum n’bass, summer camp…anything goes. With members hailing from such exotic locales as England, Brazil, Rome, Peru, Antarctica, and Long Island, the Loyds are a foxy, unstoppable (and unstoppably foxy) dance machine. In the last several years the Loyds have earned a reputation as a commanding and jubilant festival band for their massive, moving performances. These shows sweep people into the parade, whether the band is passing through fairgrounds or taking the floor during a set change, making for an inclusive musical experience that keeps the band with the people and the people inside the music.