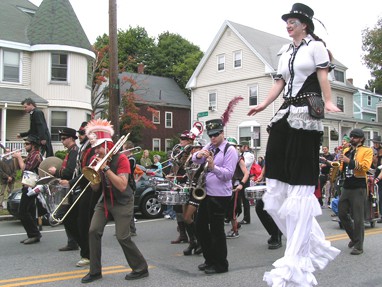 From Portland OR, MarchFourth Marching Band is a mobile big band spectacular, consisting of a 14-piece horn section, a 10-piece drum/percussion corps, anchored by electric bass (battery powered). The sound is huge, melodic, and dynamic, taking audiences on a musical journey around the globe. The band writes and performs its own material, and also draws inspiration from an eclectic range of worldwide influences, such as Eastern European Gypsy Brass, Samba, Funk, Afro-Beat, Big-Band, Jazz, and Rock music, as well as television, film, circus, and Vaudeville. To the band, art is life. Aside from being performers, members are also full- or part-time artists, designers, and craftspeople.