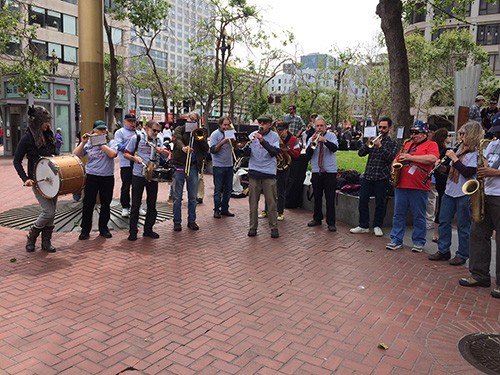 Musicians Action Group (MAG) is an ad-hoc group of musicians, horn players and percussionists, who have played at Bay Area actions and events for progressive political causes for over thirty-five years. We started in the early 1980’s, participating with the Livermore Action Group protesting nuclear weapons research. We are amateur and professional musicians who make music for marches, rallies, boycotts, picket lines, block parties, neighborhood actions and celebrations. We use our music to mobilize for union causes, against war, for civil rights, against fascism, for women’s rights, against police brutality, for the rights of immigrants, and with left/progressive movements in our local communities and around the world.

Our repertoire consists of arrangements of songs and anthems from decades of American and international struggles for peace and social justice. We recognize the power of song and music to unify, uplift, and unite, and we share the music that has brought people together in struggles for justice. Our songs are chosen for their melodies and their histories.

Many of our members have been around and active in the Bay Area music, art and political scene for many years. We have shared history with Bay Area alternative cultural institutions including the S.F. Mime Troupe, Bay Area Progressive Musicians Association (BAPMA), Pickle Family Circus, Red Star Singers, and the East Bay Sharks. We are union organizers, tenants rights advocates, teachers, scientists, lawyers, carpenters, anarchists, socialists, communists, activists, retirees and more. Musicians over 65 make up the majority of our band, and we are open to all players interested in movement music as a living tradition.