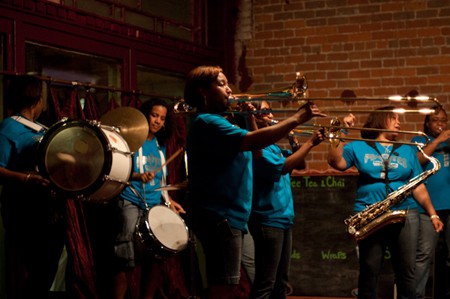 The Original Pinettes Brass Band are a New Orleans brass band. Consisting entirely of women, they are the city’s only all-female brass band. The band got their start in 1991 at St. Mary’s Academy (New Orleans), a Catholic girls’ school. Taking direction from band director Jeffery C. Herbert, they began playing New Orleans style jazz in what Mr. Herbert at the time called a “Dixieland band.” At the school’s spring concert in 1992, the band played the Rebirth Brass Band’s “Freedom” and the favorable crowd response gave Herbert the idea that he could fashion the musicians to play contemporary brass band music rather than traditional New Orleans jazz. Some of the band members’ parents were having difficulties paying tuition to St. Mary’s, so Herbert’s idea was to capitalize on the possible commercial success of an all-female brass band to pay for tuition to the school. He dubbed the band the Pinettes, a feminization of the name of his own band, the Original Pinstripe Brass Band.

For the 1993-94 school year, Herbert left St. Mary’s to direct the band at John McDonogh High School, but he continued to manage the Pinettes, many of them having already graduated from the school. In 1998, he left New Orleans to become assistant band director at Southern University in Baton Rouge, at which point management was turned over to the band members. During this period, the Pinettes played in second line (parades) and released a cassette tape, which garnered them little success outside New Orleans.

As with many brass bands in the city, the Pinettes have had a lot of turnover in membership over the years. When Hurricane Katrina struck New Orleans on August 29, 2005, band members were forced to relocate to other cities throughout the United States. After the storm, bandleader Christie Jourdain took leadership of what was left of the band and made an effort to recruit new band members because some members, greatly affected by the traumatic emotional and economic effects of the storm, were unable or unwilling to come back to New Orleans.

In 2013, after twenty-two years as a band, the Pinettes released their debut full-length CD, appropriately titled Finally.