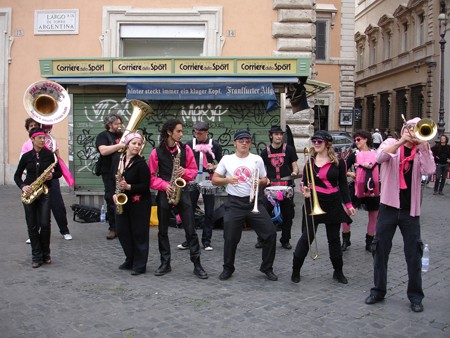 Pink Puffers Brass Band are a thirteen members marching band playing funk, jazz, blues and latin. Their base is in the nice neighborhood of San Lorenzo in Rome. PPBB started playing at the end of 2005 as a quintet (trumpet, alto, trombone, tuba and drum set), and after a whole year playing essentially on stage they decided to enlarge the group to found a true, loud and noisy marching band. Pink Puffers play almost every week in the center of Rome, in the streets, in wonderful squares and on romantic ancient bridges. Obviously they also play during parties, weddings, festivals and other events, in other cities and in other countries. You can find their influences among the brass bands’ panorama, from Youngblood Brass Band to Hungry March Band, including the music of New Orleans, the Dirty Dozen Brass Band, and all the bands playing at Honk Fest. Their final aim is to see people in front of them having fun. WHY PINK? Because a pink band playing black music is an hymn to anti-racism, because the pink panther is pink (and swing, and jazz, and like them), because pink people are against bush and war and stupidity generally speaking, because pink is the colour of the flowers that will become peaches, and because pink puffers are clinical patients affected by emphysema (and emphysema is a disease of who works blowing, like them with their wind-instruments…). The JOE TUBA FUNK CLUB is their way to thank Joe and the Hungry March Band people for coming to Europe and for changing their way to play brass and their idea of brass band.