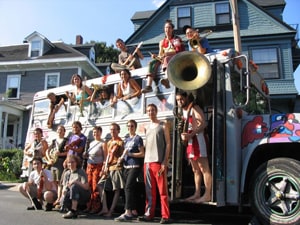 From Boston, we are a 20 person band that plays danceable folk music from Klezmer, Gypsy, and Circus music traditions. One summer the band went on a bicycle tour in Rhode Island, Southern Massachusetts, and Cape Cod. On the one week tour they covered over 200 miles hauling all their instruments, including an accordion, trombones, tenor banjo, and a 40 pound sousaphone on trailers, racks, and panniers on the backs of their bikes. The Raggers have played events from Philadelphia to Machias, Maine, from union rallies to backyard barbeques, puppet shows, mud puddles, sidewalks, farmers markets, and swimming holes. In a previous year they travelled in an old school bus, converted to run on used grease out of the fryers of restaurants. They’ve since given up the bus and have become fully bicycle moble. The low-impact method of travel fits well with the philosophy of the band members, who are concerned about the depletion of natural resources, and over-dependence on fossil fuels. This band can be described by a quote spoken by a fan at a coffee house: “Everyone’s happy in there,” he said, “They’re dancing!”