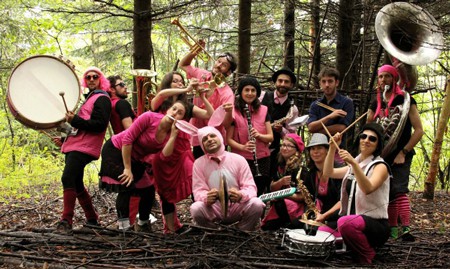 Tint(A)nar! the intergalactic anarchist marching band blew their first honk! in August 2009 at La page noire infoshop in Quebec City. Starting with only a few musicians and aspiring musicians, they gleaned partitions from fellow activist marching bands and soon tried their hand at simple DIY arrangements. Tint(A)nar! sprang outside a couple of months later, moved by the burning desire and the need for disturbing the morose order of things and for supporting the movements and initiatives reaching for collective liberation and social justice. Since then tint(A)nar! has attracted many new dynamic individuals straight from where the action is… and where the action must be!

Venues:
May day rallies, neigborhood happenings, post G-20 solidarity rallies, Buy Nothing Day action, protest against shale gas fracking, anti nuclear events, demos for free education (with everything that the word free implies), rallies for social housing, Occupy Quebec actions,demos for the rights of association and free speech, happenings for a greener (edible, colorful, breathable) city, and many many other actions for social justice and denouncing neo-liberal policies.

For your (too damn serious) information :
Tint(A)nar comes from the hybridization of the french words tintamarre and anar.Tintamarre means a loud noise which announces liberation. Anar is a french diminutive for anarchist. Later on, we learned that tintanar is a word that does exist in vernacular Italian !?! It means : Tirar qua e lá, far girare, o fare andaré in giro. Which can be approximately translated as : To pull from one side to another, to revolve, to go in circles… Well, the kinds of things you often do during protest, actions, happenings and when you dance in the streets… And it is etymologically akin to the word Revolution… which is not a bad thing in itself… Don’t you agree?