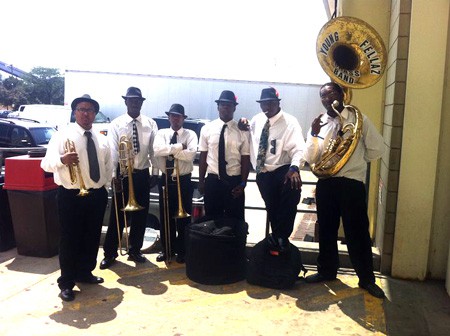 The Young Fellaz Brass Band is a lively second line styled brass band from New Orleans, LA. It began in 2005 originally with humble beginnings, only having 3 members walking around their neighborhood playing their instruments out of the love of music. Over the course of the next 6 years, the band would flourish to 8 members, along with overcoming many obstacles and setting many milestones for such a young group of musicians, such as recording 3 studio albums, numerous festivals in New Orleans, along with performing in many states across the United States, including the HONK! TX festival. The band’s style of music covers many genres, including traditional jazz, hip-hop, R&B, rock and pop tunes. The Young Fellaz Brass Band is definitely gonna make you move your feet!