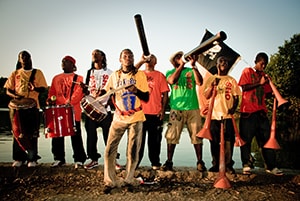 Originating in Haiti, Rara music is part-carnival, part-social protest, part-vodou ceremony, and is one of the most breathtaking and contested music forms in the Americas. Raras utilize African drums, marching band percussion, bamboo tubes. But the distinctive sound comes from the metal “Kone” horns that are each tuned to a single note and then are “hocketed” – where multiple players blow in patterns to create complex melodies. Traditional song lyrics range from communicating rural news, to performing spiritual work of a vodou society, to using coded messages to critique political systems, but the energy is always that of an infectious, unstoppable celebration.DJA-Rara (pronounced JAH-Rah-Rah) has been keeping the rara tradition alive in America for almost 20 years. DJA-Rara performed on Wycleff Jean’s 1997 album “Carnival” album, and their 2007 song “Why” was named one of the top carnival songs of that year by Afropop Worldwide. They are they subject of the upcoming PBS documentary “The Other Side of the Water,” and they play every Sunday night of the summer in Brooklyn’s Prospect Park, often leading processions of over 10,000 people. The band is one of the unique treasures – and best kept secrets – of the city.