On Friday afternoon, October 10, activist brass bands from around the country will descend on downtown Boston for a Day of Action in the campaign to raise the minimum wage. From as far away as Seattle, Brooklyn and Montreal, these loud, colorful and fun-filled bands will “HONK! for $15.” They will use their powers of music and spectacle to bring the national fight for a $15/hour minimum wage to the doorsteps of local Boston establishments still refusing to pay their workers a living wage, earn paid sick time, or form a union. Download a HONK! for $15 flyer! 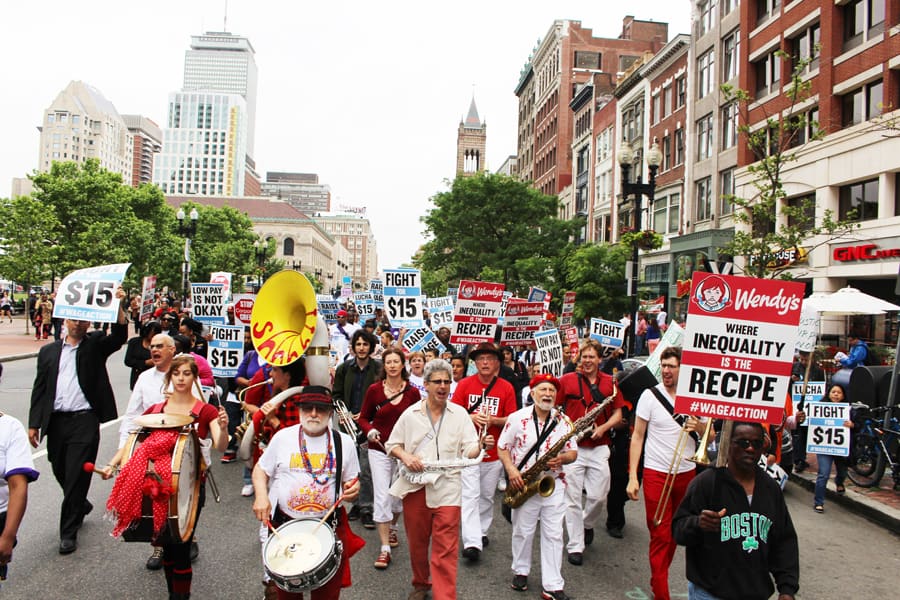 Working with members of SEIU, MassUniting, Jobs With Justice, ROC and other organizations, our “HONK! for $15” day of action is the next step in a worker uprising sweeping the country, as the national conversation on income inequality reaches a fever pitch. Beginning with Seattle’s passage of a $15 an hour minimum, workers in Massachusetts won passage of a raise in our state’s minimum wage. Then this summer, emboldened by these victories, Boston healthcare workers, airport workers, taxi drivers, adjunct professors and restaurant workers all stood together for the first time and joined the Fight for $15 at a rally in Copley Square. And on September 4, local workers participated in an act of civil disobedience in downtown Boston to send a clear message to fast-food companies: they are prepared to do whatever it takes to win $15 and a union.

In 1968, Dr. Martin Luther King said “that it is a crime for people to live in this rich nation and receive starvation wages.” Yet, on the 50th anniversary of the War on Poverty, extremely low wages in many different industries, in big cities and small towns, continue to keep workers and their families trapped in a cycle of poverty. “HONK! for $15” will use songs and chants, signs and large puppets, to bring Dr. King’s message to the streets, loud and clear, as labor, community and faith groups join with visiting street bands to demand action.

Everyone is invited to join us:

The time has come to make a loud and proud call to end wage inequality and change the economic landscape for all workers!